Our Camia plant (also called White Ginger) continued to bloom profusely with the rains and cool weather. With so many flowers, it's so extraordinarily fragrant. I smell it when I open the bedroom window. 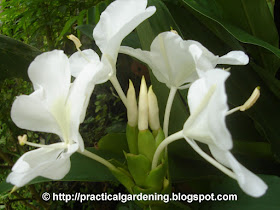 This plant started from a bulb in a pot last year. It's now planted in the ground, is around 4 feet high and continues to grow.

Here's a bit of info from pnh.com: 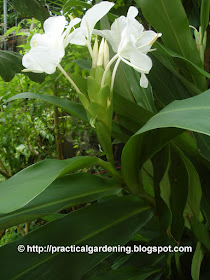 Description: An epiphytic herb with 1 to 3 stems. The terminal flowers are white with a shade of yellow and with crinkled margins. The fruit is a three-sided capsule which turns orange-yellow and bears dark red seeds.

Habitat: Epiphytic on trunks and branches of trees in primary forests at altitudes 900 to 1,800m.

I didn't think they are an endangered species but according to wikipedia, they are included in the Philippines' endnagered list. Elsewhere in the globe, it's considered common.

Here's an interestning entry from wikipedia:


The White ginger lily (Hedychium coronarium) is originally from the Himalayas region of Nepal and India where it is known as dolan champa दोलन चम्पा in Hindi, takhellei angouba in Manipuri, sontaka in Marathi, and suruli sugandhi in Kannada. The species was introduced to Hawaii by settlers. The native Hawaiians refer to white ginger as 'awapuhi', using the juice of mature seed head as a hair and skin treatment.

In Brazil it is very common and considered to be an invasive weed. It was introduced in the era of slavery, brought to the country by African slaves who used its leaves as mattresses.

In Cuba it is the National Flower, known as "Mariposa blanca" literally "White Butterfly Flower", due to its similarity with a flying white butterfly. This particular species is incredibly fragrant and women used to adorn themselves with these flowers in Spanish colonial times; because of the intricate structure of the inflorescence, women hid and carried secret messages important to the independence cause under it. It is said that a guajiro's (farmer's) house is not complete without a white ginger in its garden. Today the plant has gone wild in the cool rainy mountains in Sierra del Rosario, Pinar del Rio Province in the west, Escambray Mountains in the center of the island, and in Sierra Maestra in the very west of it, but the plant is not endemic of Cuba. Its fragrance can be extracted by "enfleurage".


Here's a closeup of our Camia or the "White Butterfly Flower" as the Cubans call it. 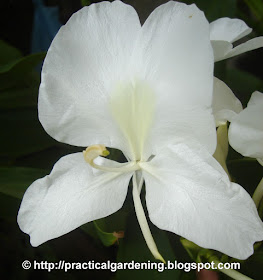