I've read with much interest from the internet how folks prepare homemade fish emulsion and swear by its effectiveness. There are so many articles saying how simple the process is in making fish emulsion. I suspect though that many of these how-to articles just parrot each other.

There is little material thus far, however, by way of photos and/or videos that illustrate the processes involved in this so-called simple procedure - as of this writing, anyway. So this article will illustrate, by pictures, just that. 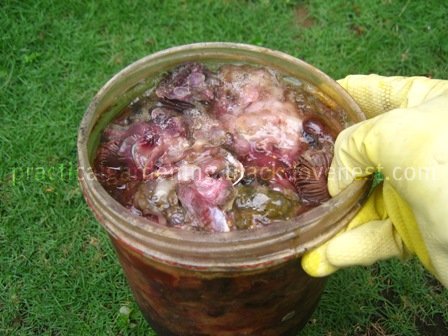 Simple and easy - yes - but a bit messy and stinky. You will not believe how bad the stink can be. And for many, that may be an understatement because the basic raw material for fish emulsion is well, raw fish scraps (as shown above) which will be decomposed.

You will likely be able to get fish scraps or wastes in places where fish is cleaned prior selling or consumption. The fish section of the wet market will usually have traders removing fish parts like intestines, gills, liver, gall bladder, heart, fins, tail, scales and even bones. Typically, these are thrown away and so you could just ask them for free.

That's how we get fish scraps for free. Many traders in the wet market are just happy to get rid of their refuse from the fish cleaning. We're able to get a kilo or so by just asking. Of course the fish scraps include everything and you just can't become picky and select a few parts. I bring along a plastic container with a lid on it. Plastic bags won't do because of the risk of them bursting open.


Making Your Own Fish Emulsion from Fish Scraps

The pulp that will be left behind after extracting and collecting the fish emulsion is not wasted. It may be used as a good starter mix for the next batch of fish emulsion, because of its state of decomposition. It may also be used to feed a compost pile that can later be applied and mixed into your garden soil.

Procedure
In the first week, the stench will be horrible. Try to do the mixing at night when there are no flies. If there is wind, turn your back to where the wind is coming from so you won't smell most of the wafting odor. In the second week, the odor will smell like that of fish sauce that's common to Thai and some Asian cooking.

By the third and fourth week, much of the contents would liquefy because of decomposition. Because of that, it becomes easier to mix the contents. The odor will be less offensive, but still bad, nonetheless. The mixture will also be a bit darker because of the added molasses. 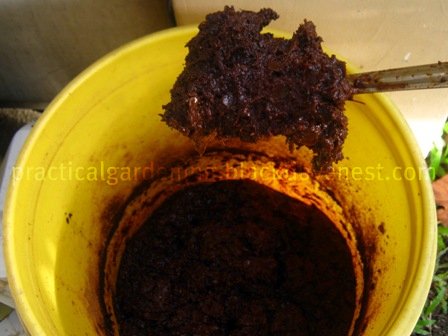 After four weeks or roughly a month, you'll be ready to extract and collect the fish emulsion.


Other Articles in this Series: